Students in the Lower School of Oak Knoll School of the Holy Child joined more than 100 million students spanning the globe this week who participated in “Hour of Code” — the largest learning event in history. Here, students commit to learn and explore computer science methods for an hour during Computer Science Education Week, December 9-15, 2019.

“The Hour of Code” made history when it was founded by the education nonprofit Code.org back in 2013. Here at Oak Knoll, Kim Connolly, Associate Director of Technology Innovation and Integration, said that coding is a vital part of their science curriculum not only this week but all throughout the year.

“In today’s world, children are inundated, and often, overwhelmed with smart devices such as iPads, phones and even ‘Alexa,” Connolly said. “Learning how to program code on these devices is really teaching children how to be in control rather than letting the devices control them.”

During this week, Lower School second grade students in Alicia Grimes’ science class visited Oak Knoll’s makerspace — called the IDEAS Lab, which stands for Innovation, Design, Engineering, Art and Science — where they programmed robots, using a Dash & Dot program, with driving codes and sounds of the life cycles of their animals.

On large pieces of paper, students divided into small groups and charted out the life cycle of their animal — a few of which included the frog and baby chick. Next, each group worked on a program on their iPads called Blockly where they input the stage of the animal’s life with a sound and driving code.

“We wanted to demonstrate to the students what a cross-curricular project looked like where they would be involved in a hands-on activity so they could actually see their robot physically drive the life cycle of their animal using technology,” Grimes said.

While the “Hour of Code” annually shines the spotlight on the importance of exposing students to technology with code, Connolly prioritizes coding all year long by working with each Lower School grade once a week. She does this, she says, because their future jobs depend on it.

“Skills — not job titles — will define the roles of future workers and most of those skills will be honed by creating, problem-solving and collaborating using technology,” Connolly explained.

Much like her work with the second graders coding life cycles of animals, she always finds a way to integrate code into what each grade level is learning in all of their different classes.

“Coding is an extension of writing and in a digital age where we are interacting with gadgets to accomplish our daily routines, it’s becoming critical to know how programming works,” she said. “We want our students to interact with each other in this digital age, which enables them to be creators, designers, engineers and much more.”

Some of the additional “Hour of Code” projects Connolly worked with the Lower School this week are as follows: 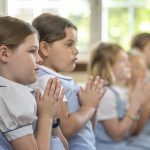